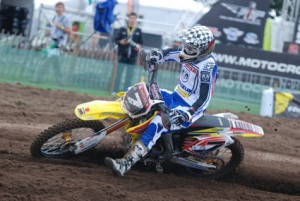 With great enthusiasm, the people behind the auto centre support motocross. And for reasons, because their CEO Fokko Winter himself was in the years 80/90 a rider who was among the best in Holland in the Schoolboy ranking in the 855cc and later 125cc.

The Team are supporting two talented riders, namely Jeffrey Visser, who finished second in the Youth Championship in Holland this year and the young talented Mrs Marianne Veenstra.

The 17-year-old Marianne scored this year ones again a seventh place in the FIM MX Women’s World Cup and she also participated very good in the Arai Lady’s Cup, which was held in Germany.

The material of Marianne was prepared at our shop and we are very proud with the results Marianne achieved racing the He-Ja tuned Suzuki RMZ250.